Go to content
Adelphi or Duckmanton Ironworks Pit.
SK 47 SW. 4294 7146.
The Duckmanton Ironworks pits comprising of around five shafts were sunk between 1826-1835 and exploited the First Saint Johns seam at one hundred feet from the surface, the Second Saint Johns seam at one hundred and twenty seven feet and the Top Hards seam at three hundred and nineteen feet deep. A lease was arranged with the Duke of Devonshire to mine coal in the Staveley Upperground colliery which was in operation from around the turn of the nineteenth century until 1842. Other collieries (Tom Lane or Duckmanton colliery) were worked at Tom Lane until 1851. Higher up the valley towards Calow on the site of Lodge Farm was a colliery which worked two shafts into the Deep Soft or Main Soft seam and the Pinder Park ironstone rake with Deep End colliery on the Moor Farm site belonging to Benjamin Smith and this was abandoned in about 1859. Coal was also mined at Hady Colliery but may have supplied the Calow ironworks and later the Griffin Works in Chesterfield.
This area had however been worked much earlier, as an old document states the following:
Grant from John Stanley and Robert his son to John, Abbot of Welbec, of a watercourse called "le Sought", running from a mine of sea coal belonging to said Abbot in Dugmanton, through or under the lands of the said John and Robert, as far as Reynaldbrigge. 1451. See 'Two Local Markers'.

The shafts were all brick lined using locally manufactured bricks and one such shaft employed an idea from Cornish tin mining to allow men to ascend and descend the mine. The shaft had a series of insets in it large enough to house a man and the installation of a Cornish type beam pumping engine on the surface (allegedly) allowed men to ride in and out by riding on the cross stays of the pump rod. As the rod raised the men rose with it, as the rod became stationary the men got off into the refuge holes and waited until the next upwards motion to rise further up the shaft. So after many 'ons and offs' the shaft could be traversed. Ventilation at the time of the Smiths mining operations would have been by a furnace in the return or upcast airway, which was created originally by splitting the shaft into two using a brattice frame. The system of ventilation here would suggest that separate shafts for upcast and downcast air were employed. 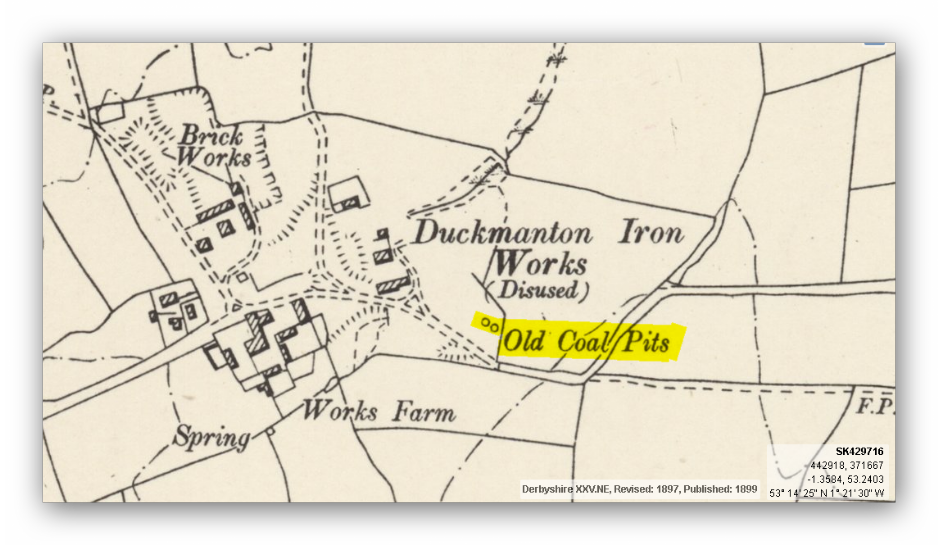