Go to content
The Summer House, Glapwell Park.
SK 47592 66707
Terrace Wood, looking to the west and the escarpment down towards the old Glapwell colliery tips to its rear.
As a part of the Glapwell Park and situated at the end of a short footpath from Glapwell village which runs across from the Glapwell Hall. The Summerhouse was built of local limestone blocks to the exterior and with some local red brick arching and plasterwork to the interior. Built in the middle of the Terrace Wood shown in the photograph above it was supposedly in the style of a Gothic medieval chapel. The wood runs from the north east and curves towards the south as it joins Car Wood. The brickwork does suggest a simple chapel style layout. It was built prior to 1811 of local yellow limestone (see bottom of page for reference).
It may have been built as a folly, http://en.wikipedia.org/wiki/Folly (Opens in a new window)
This will explain it better than I can.
However an enigmatic building existed a few hundred yards away which may be another folly. Blunder Castle near to the Blunder Castle Plantation. Possibly not now, may have been a dwelling, see Blunder Castle write up.
Blunder Castle Plantation SK 47426 67138 .
Blunder Castle SK 472 672
1877 one inch to one mile scale map. Shown bottom middle.
Remains Side view. Looking east.
Front View of the external limestone block work, quarried locally. Looking west.
Internal view of the remains showing a refuge for a statue possibly a ‘Madonna and Child’ or a ‘Saint’ with the remains of some of the bonding for the ornate plasterwork . Looking east.
The brick is a handmade local one. Notice the scouring where the clay blank was levelled off whilst in the mould by running a wooden hand plank from left to right and back to get the top level with the wooden block mould.
This is a brick manufactured no later than the middle of the nineteenth century made at any of the local yards from local materials (Late eighteenth to early nineteenth century?).
Sandersons Map. 1835.
Glapwell Summer House is mentioned in the Philosophical Magazine Volume XXXVII by Alexander Tilloch published in 1811, p172.
‘Glapwell Summer House NNW of the village (made from the local strata) yellow lime(stone) no4 on the East Rother Ridge’.
Farey also mentions the Summer House as being made of yellow lime on p34 of General View of the Agriculture and Minerals of Derbyshire. Vols. 1. J. Farey. 1811-1817.
Glapwell Chapel.
Notes of the Churches of Derbyshire. Volume 1. Cox. P105.
At Glapwell, also, a township of this parish (Bolsover), there was an ancient chapel, of which no traces are now extant. We know of its existence from the Chartulary of Darley Abbey, which records an agreement, made about the year 1260, between the Abbot and the inhabitants of Glapwell about roofing the chapel. They agreed to give five acres of land, as an endowment, to keep it in repair.* Probably it fell into disuse and was demolished in the Reformation, for no mention is made of it by the Commissioners of 1650, who reported in favour of the township of Glapwell being united to the neighbouring parish of Hault Hucknall.
*Cottonian MSS. Titus, c. Ix., f. 116. 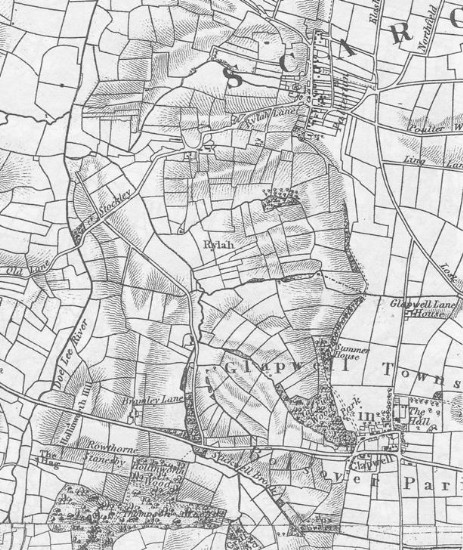 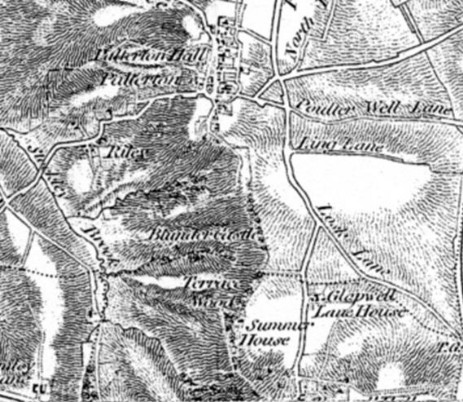