Go to content
Wheeldon Mill Collieries.
Wheeldon Mill Colliery. SK. 394735. SK 39490 73560.
Brickyard. SK. 393736.
Brimington Colliery. SK. 393733.
Gaunts. Pit Yard SK 39397 73316
It would appear that a colliery worked at Wheeldon Mill from before 1790 as John Farey logged the colliery as follows: Wildens-Mill 2/3 mile WNW of Brimmington working the 8th coal. (Deep Hard, Potters, Pot House, Townend, Deep End, or Squires). This colliery was in the wood with a single shaft at SK 39490 73560 in Pitfield Plantation or Wheeldonmill Plantation. It had a brickyard to supply the colliery and to build the houses nearby along with a later colliery centred at SK. 394735. The area would have been well known as it had a wharf for access to the canal a matter of yards away. This area is full of colliery spoil. There is an old shaft sited in a nearby field but appears on maps after 1883 and may be the site of another colliery, it may also be a miss-location of the shaft in the plantation.
An old tub rail used as part of the fence at 39484 73487.
S. M. Lancaster is working the colliery from 1880-1896 and is producing coal from the Piper Seam. Butt & Carrington, Brimington Common, are working with three men 2 underground and 1on the surface in 1908.
No colliery is listed here from after 1908 until a new colliery is being developed nearby in 1938.
No colliery is listed here from after 1896 until a new colliery is being developed nearby in 1938.
Gaunts Wheeldon Mill Colliery. 1938-1967.
(Site is bottom of field with old shaft in it, left of allotments with bottom boundary the stream).
Wheeldon No’s 1 & 2.
Pit Yard SK 39397 73316
Metal Spike on tip SK 39449 73391
A little further towards Brimington and prior to the start of World War II in the records for 1938 a new colliery is being developed by H Gaunt, of Loscoe Brickworks, Loscoe.
JH Reaney is his manager he is employing 5 men below ground and 1 on the surface.
By the end of the war JS Gaunt’s, Wheeldon Mill Colliery (Brimington, Chesterfield) is in full production as Wheeldon Mill No.1. Colliery with AD Marriott manager is employing 341 underground and 162 on the surface in 1945.
During the war Wheeldon Mill No2 colliery was being prepared but sinking was discontinued in January 1944.
It appears that the colliery had two drifts and was at least working the Deep Hard and Piper Seams as late as December 1946.
Mike Revill writes:
I have been interested in local history for years; I email you in hope that you may be able to help me. Several members of my family, Granddad and uncles and cousins all worked at this pit.
I cannot find any info anywhere regarding this colliery. The remains of the pit can still be seen to the rear of the Old dog track at Wheeldon Mill. I remember the footrill entrance being sealed with sleepers in the 1960s and now you can still see concrete beams where the entrance was only last week did I visit the site and it’s still visible that the old pit was there.
My dad informs me in the 40s and 50s up to 160 men worked underground. My uncle Tom lost his arm blasting in the colliery he had a hook attached to his arm by straps I remember that well.
The Gaunt family owned the pit I believe when my family worked there ,The actual closure date no one really can remember but it was closed in the 50s because I remember as a kid playing on the site.
If you decide to visit site the best way is to park up at canal carpark next to Peter Swans pub at Wheeldon mill. Then walk up towards Brimington on the right after approx 100 mtrs you will see sign PUBLIC FOOTPATH just follow that, it leads round to old pit gates.
When on footpath to your left is Revills wood nicknamed after my uncle Tom, apparently the land was leased to him as part settlement for the loss of his arm .He lived in pit houses Called Drake Terrace still there on left as you go down to the dog track.
Best Regards.
Colin Hill Writes:
My father, Frank Hill was evacuated from Fulham to Wheeldon Mill (Drakes terrace) in the early forties.
He stayed with Tom and Evelyn Revills and their children Stan, Tom & Sylvia. They used to race a whippet named 'Beauty' and pick potatoes on Mowbrays farm. He used to go with Tom Revills to the pit on Sundays to start the pumps to pump out the water.
Many thanks,
Colin Hill 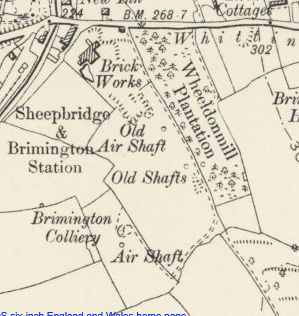 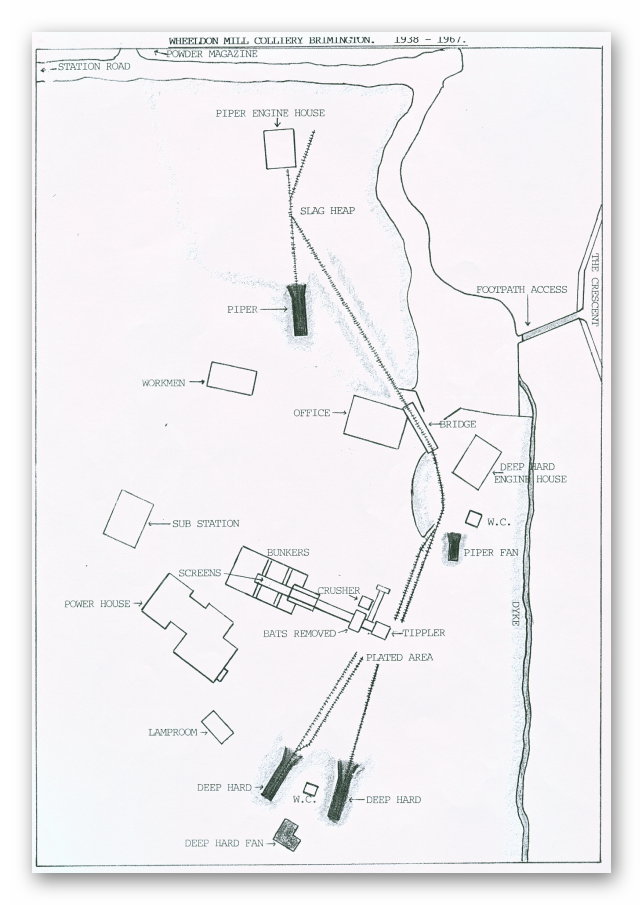 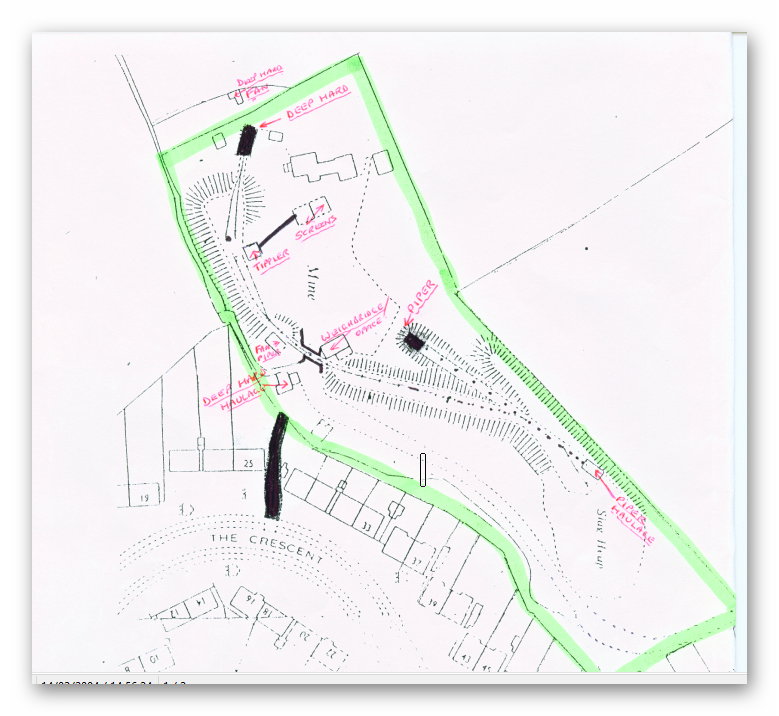