Go to content
Glass Bottles
Left to Right. (Salvaged from the Chesterfield Canal or Ploughed up in Carr Vale).
F.Holmes & Son Whittington Moor.
Kendall Brothers Staveley & Shirebrook.
F.Holmes & Son Whittington Moor.
Hardy & Martin Kirkby & Staveley.
F.Randall & Sons Prospect Works Brampton.
Station Hotel Carr Vale.
T.P.Woods Chesterfield.
Glass Production.
Glass was first made around 4000 B.C. in Egypt and Mesopotamia, primarily as glass glaze for beads and jewellery which was formed in clay moulds and then polished and ground. By the first century B.C blowing by mouth through an iron tube was used to produce drinking vessels. Glass of all kinds was in common use by Roman times.
Glass is a mixture of 55% sand, 25% soda ash and 20% limestone. To assist in melting 15%-30% scrap glass or cullet is added. The glass was produced in a brick cone or clay crucible or glass pot made from special clays which were extremely heat resistant by being free from impurities such as iron oxide and by having a high silica content as glass production needs temperatures of around 600-800 degrees centigrade. Sand alone needs a temperature of 1,500 degrees Centigrade to melt but this is lowered by the addition of other materials. The heat for the process being provided originally by wood which produced an alkaline flux for the process which was made illegal in 1615 by Royal Proclamation, this led to to the process being fuelled by coal. It was realised from the first glass produced that adding materials to the mix could change the colour of the glass and so the colouring of the glass became a science in itself.
In the early 17th. Century it was discovered that beer could be kept almost indefinitely in a glass vessel and because of secondary fermentation taking place as the beer was stored it actually improved the taste and strength of the beer inside.
There was heavy taxation on glass until the Excise Act was repealed in 1845, until then the tax was 8/9d per cwt. By 1773 the sheet glass making process which was until then a French industry was started in England it was refined over the years until by the 1830's glass was cheap enough to mass produce for housing purposes.
The main use for the locally made glass was bottled products such as preserves, beers, porter, wines, carbonated drinks and spirits etc.
Users of Glass Bottles.
F.Holmes & Son Whittington Moor. Mineral Water.
Kendall Brothers Staveley & Shirebrook. Mineral Water.
Hardy & Martin Kirkby & Staveley. Mineral Water.
F.Randall & Sons Prospect Works Brampton. Mineral Water.
T.P.Woods Chesterfield. Beers, Wines, Spirits.
J.J.Clayton. Mineral Water, Ginger Beer, Ale, Stout.
Simmonite & Sons. Mineral Water, Ale, Stout.
Scarsdale Brewery.
Brampton Brewery.
Chesterfield Brewery.
Glass Manufacturers.
Bailys Directory 1781-1784.
Richard Dixon
Richard Dixon the founder and his family produced glass at Glasshouse Common from about 1710 until 1850.
Dixon's glass was used for a wide variety of products from the ornate to the domestic wares and window panes. The glass was produced in a variety of colours shapes and sizes including black for wine and ale.
The company must have been a prosperous one as the Dixons first residence was attached to the side of the works, later Dixon had Whittington Hall built for himself and his family where they lived until the closure of the business in 1850. In 1778 Dixon was appointed the new resident engineer to the Chesterfield Canal construction company to which he was already associated as their book keeper. Dixon was responsible for the construction of branch lines and canal links to other companies quarries, factories and mines from Chesterfield to the Trent. Dixons Lock on the Chesterfield district length of the canal was named after him
As the years passed Dixons Glass became more ornate and a line of cut glass was introduced which was of a comparable quality to that purchased by the rich and famous anywhere. Including from 1779-1807 the firm of Watson and Bradley who purchased £2,000 of glass from John Dixon the grand-nephew of Richard Dixon. (History of Old Sheffield Plate. by F.Bradley).
The site of the works on Glasshouse Common was one that was convenient for the transport of glass to Chesterfield and Sheffield and from there on to the north and south of the country with the later Chesterfield Canal affording a cheap means of transport by inland waterways or by sea.
The area in which Dixon produced his glass on Glasshouse Common was an area that was rich in coal. Presumably he would have mined this coal for the heat used in the glass production and later the coal was mined by other companies.
It is unclear why the company folded in 1850 and little information remains to trace this unique form of manufacture in Chesterfield.
From an article in the 1931 Whittington Parish fete magazine.
Many thanks to Brian Crosland. 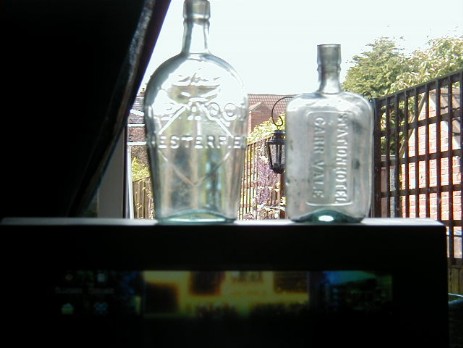