Go to content
Bolsover Castle
The Castle is WELL WORTH A VISIT even if you went a few years ago, there is so much more to see and most areas are now open to the public.
A view of the Keep or Little Castle from the Great Courtyard
The town of Bolsover is mentioned in the Doomsday book as Belesovre, the name is derived from the Phoenician or Old English word Baal or Bel who was the god of fire. The word ofer or over is Old English for a slope or ridge. Hence Bolsover, Belesovre, Bolsofer refers to ‘Bols high place’. Boles were places locally where ores of lead or iron were smelted usually on a south-west-facing slope. The town was primarily a fortified hill town and may have been part of an elaborate early warning system to warn of immanent attack by lighting fires on the top of the hills at night to warn other settlements nearby.
The local Doomsday survey of 1086 recorded by the Sheriff of Nottingham mentions a village at Bolsover but no mention is given to a castle being there at the time.
The Norman Castle.
It is presumed that the original castle was built around 1102 on a yellow Permian limestone escarpment overlooking the Scarsdale Valley by William Peverel the Younger (who may have been one of the illegitimate sons of William the Conqueror) the first of the king's bailiffs in this part of the county. At the same time a castle was built at Peveril-in-the-Peak and linked by a road that ran through the site of Markham colliery and on to Castleton in the Peak District, the Peveril Road. Bolsover and Castleton were therefore deliberately planned and fortified Medieval towns.
The original castle was later re-enforced by a walled curtain of masonry to protect the dwellings within the village and in about 1173 Henry II added a stone keep to the castle to further fortify it. The keep is similar in design to the one at Castleton and both were garrisoned during the Barons Rebellion 1173-4. The castle was transferred from the king to William de Ferras earl of Derby in 1216. A little later in 1216 as a result of the reluctance of the constable Gerard de Furnival to leave the castle it was besieged and the resulting damage took until 1223 to repair. Several more additions were made to the town and castle over the years but the castle had fallen into ruin by the time it was taken over by Sir Charles Cavendish in 1613, when afterwards a new ‘castle’ was built on the site and nothing now remains of the original Norman castle which once stood overlooking the valley.
Peveril in the Peak, linked by the Old Peveril Road from Bolsover area to castleton is supposedly the sister castle to the original one at Bolsover. 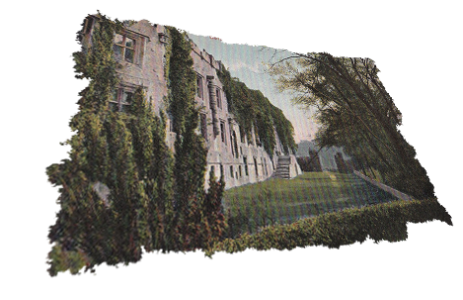