Go to content
Peter Fidler 1769-1822 & Sutton Mill, Sutton Mill Farm.
The Sutton estate provided farmland locally; at the bottom of Bolsover Hill across from the site of Bolsover colliery is Mill Farm, to the left side of which but now demolished was Sutton Mill powered by water from the drainage goyts or goits stored in a millpond. The goyts or drainage ditch drained water in wet times from the upper fields along the side of the river Doe Lea from Buckbridge to the millpond at the back of the farm. In 1835 the mill was worked by Joseph Cuthbert who was a miller, baker and Hour dealer. The farm was sold along with 136 acres in 1919 by the Lord of the Manor William Arkwright; it raised £2,900 at auction and was purchased by the tenant Mr. F.Holmes. The farmhouse building has a stone bearing the inscription:
E.S. 1732
In 1715 the then Fourth Earl of Scarsdale, Nicholas Leeke was accused of supporting a suspected Jacobite rising and was sent to the Tower of London to await 'the Kings pleasure'. He managed to raise bail and was freed in June 1716.
It was at this time the Earl decided to abandon politics and concentrate on the restoration and expansion of his estates. Part of this work included the restoration of his mill, hence the stone. E.S. Earl Scarsdale rebuilding the mill in 1734.
Another commemorative plaque on the front wall.
Peter Fidler was noted for his frontiersman exploits as the Chief Surveyor of the Hudson Bay Company. He was born at Mill Farm, Bolsover in 1769. Peter Fidler travelled into southern Alberta, Canada. His journal or sketchbook provides the first references to cactus, coal and oil deposits in Alberta. He was the first to record the existence of Chinook winds and the only person to leave an eyewitness account of a working buffalo jump. He was trained as a surveyor by the Hudson's Bay Company; he charted the rivers, lakes and mountains and sent the information to the great mapmakers of Europe where his work was used in the new atlases around the world.
Fidler married a Native Cree woman and they had 14 children, eleven of whom survived. Other than returning on leave to his birthplace, Bolsover, England in 1812 to build a home for his mother, the rest of his life was spent in western Canada. His last job as surveyor was to lay out river lots for the Red River Colony (Winnipeg). He died at Fort Dauphin Canada in 1822.Peter Fidler's Journal was titled: Journal of a .Journey over Land from Buckingham House to the Rocky Mountains in 1792 & 1793.
The Hudson's Bay Company was a company chartered in 1670 to Prince Rupert and seventeen others by Charles II to govern and trade in the huge area of the Canadian north-west, called Rupert's Land, which drained into Hudson Bay. Although huge profits accrued from the fur trade, the company was, until 1763, threatened by competition and military attack from the French. From 1787 there was occasionally murderous conflict with the North-West Company over control of the fur trade until the two companies amalgamated in 1821.
Peter Fidler, the Man, 1769-1822.
Peter Fidler, born 1769 in Bolsover, Derbyshire, England, signed on as a labourer for the Hudson's Bay Company in 1788. On his arrival in Canada, he was trained by Philip Turner, the company's factor, as a surveyor. Fidler did his job with such accuracy that his maps are referred to in modern times. He used this same accuracy for detailed drawings and descriptions of the flora and fauna he found as he worked his way across the Prairies.
When he became fort master for the company, he carried seeds wherever he went. He planted gardens at all the forts and these gardens were grown as far north as York Factory. With many forts established, he turned his attention to the agricultural prospects of the West. He studied soil samples from the different fort sites and planted wheat and barley. Potatoes were introduced in 1780 and became part of a staple diet at the forts. The potato, turnip and other vegetable crops failed due to drought conditions. These crops yielded well for four years commencing in 1812. In that same year, the barley crops were destroyed by a grasshopper infestation. Fidler noted that this occurred every 18 years.
In 1812, the Selkirk settlers came in from York Factory. Fidler taught them how to build homes, plant gardens and grow crops. He had purchased a bull and a cow in England for the handsome price of £100. These animals, which were named Adam and Eve, produced offspring in the settlement. He also brought a cock into the settlement and thus poultry was introduced.
Fidler faced adversity. His forts, gardens and crops were frequently destroyed by enemy fur trading companies and the Indians. He never quit rebuilding and replanting. Again and again his story is one of bravery, stamina and above all loyalty to the Hudson's Bay Company and Canada.
In 1819 Fidler retired to Fort Dauphin. There he spent his remaining years caring for his garden and wheat field. He recorded that there was a new agricultural event flourishing near Fort Dauphin, a maple sugar industry.
Fidler and his wife, Mary, a Cree woman, had 14 children of which 11 survived. Fidler died in 1822. He was buried at Fort Dauphin. The memory of this remarkable man will remain forever in the minds of his descendants and admirers.
The Peter Fidler Cairn.
‘This Cairn is dedicated to the life and achievements of Peter Fidler (1789-1822). Son of Bolsover Peter Fidler born on 18th August 1780 at Sutton Mill Bolsover. Laid to rest at Fort Dauphin Canada aged 53 years. His achievements for Canada were as great as Captain Cooks’ for England.
The unveiling was performed on the 18th August 2001, (the anniversary of Peter’s birthday) by Councillor Walter Burrows of Derbyshire County Council and Councillor Brian Hendry Chair of the District of Bolsover in the company of Larry Fidler Peter Fidler’s descendent’.
Mill Farm Map 1875. 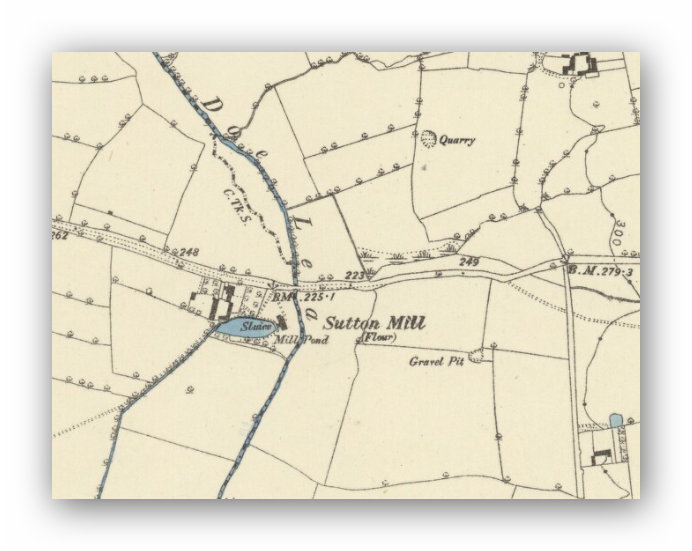