Go to content
Westwood Colliery.
Brimington Moor Iron Furnace. SK 47/57 411726
Open Holes SK 41358 72719
Westwood Bell Pits (South from) SK 41589 72326
Westwood Bell Pits (South from) SK 41608 72822
Westwood Colliery SK 47/57 41557295
Open Holes
An old version of opencast workings. The topsoil, turf and clay are removed exposing or laying bare the local ironstone rakes and coal seams. The coal and stone are removed by following the seams as they dip and this leaves large expanses of quarry like holes in the area. The openholes here produced coal and ironstone for Staveley Works during the 19th Century.
Bell pits and openholes reported in this area from 13th-17th century.
Brimington Moor Iron Furnace
In 1860 the Brimington Moor Iron Company were producing and working iron at Furnace Farm for the Staveley Company to augment the production at Staveley Furnace. Coal was mined here and tuned into coke in the 50 coke ovens presumably used in the making of iron.
The works produced cast iron for boilers and cylinders for use in steam engines. It also produced stoves, grates, ovens, shovels, hoes, trowels and rivets on site.
The rusty-coloured ironstone which was mined locally comprised of only 30% iron when smelted, it came in several shapes; balls, nodules, dogs tooth and so on referring to its physical shape. It occurs as 'Siderite' or iron carbonate and several seams or 'Rakes' which occur between the main coal seams.
Raw Materials at a Local Furnace.
Production and Ore Mining needed to keep the furnace in production.
To show the amount of raw materials required at the furnace we must first look at the amount of pig iron that can be produced at a furnace. In 1848 most furnaces in the locality were able to produce in excess of 4,000 tons of iron per annum.
As the ironstone yielded only one third of its weight in iron then 4,000 tons of pig iron needed 12,000 tons of local ironstone.
Prior to 1828 and James Neilsons invention which allowed preheated air into the furnace it took eight tons of coke to produce one ton of iron, his invention enabled a reduction from eight tons to five tons to take place. This furnace did not benefit from Neilsons invention.
It took 1.33 tons of coal to produce a ton of coke.
Therefore it took 10.64 tons of coal to produce the 8 tons of coke for the furnace to produce 1 ton of iron. It therefore took 42,560 tons of coal to produce the annual 4,000 tons iron.
A survey document from the Barrow family (later to become the Staveley company) shows that the Inkersall Rake ironstone was being mined in the Duckmanton and Staveley areas at a rate of 1,932 tons per acre. (24th. March 1840).
An annual production of 4,000 tons of iron in a cold blast furnace, needed.
4,000 tons of iron needs 12,000 tons of ironstone to be mined.
42,560 tons of coal needs to be mined to be turned into 32,000 tons of coke.
Many tons of limestone need also to be mined and then burnt to produce lime to mix in to the furnace be used as a flux.
The furnace here was a cold blast furnace, i.e. Cold air only was fed into the iron making process. When the furnace closed the steam engine was transferred to Broad Oaks Foundry in Chesterfield. (1880's)?
The roads into Westwood from Brimington Common (Moor) were all part of the 1842 Inclosure (Enclosure) Act.
Westwood Colliery SK 47/57 41557295
A single shaft of 51 yards deep into the Blackshale seam. Abandonment dates shown from 1856-1857.
There are however several other shafts in this area.
Colliery roadways connected to Albert colliery shaft, which is 109 yards deep into the Blackshale seam. (SK 47/57 416735) Colliery owned presumably by the Staveley Company.
Westwood Bell Pits
Centred around SK41600 71990.
As the pits have filled with water they are now easy to identify.
One of the earliest forms of underground mining where a central shaft would be sunk into the seam and the minerals worked outwards from the shaft until the pit roof was in imminent danger of collapsing whereupon a new shaft would be sunk nearby. The completed pit would resemble a bell shape inside hence the name bell pit. Any wasted materials would be used to fill in the worked out bells nearby. The materials would be hoisted up on a wooden rope winch or windlass with a basket attached to it, to enter the pit a wooden ladder may have been used. Many examples of this type of mining can be found in the area from Brimington through Inkersall to Duckmanton and beyond. There presence can be indicated by circular indentations in the ground with a growth of young trees about the area of the disturbed ground.
Bell pits situated along east edge of Westwood south. 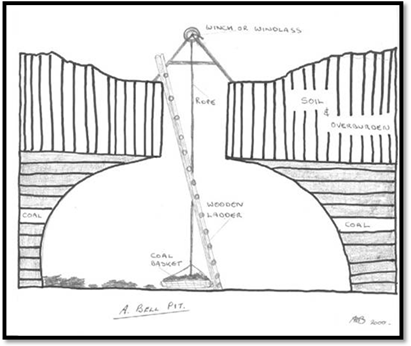